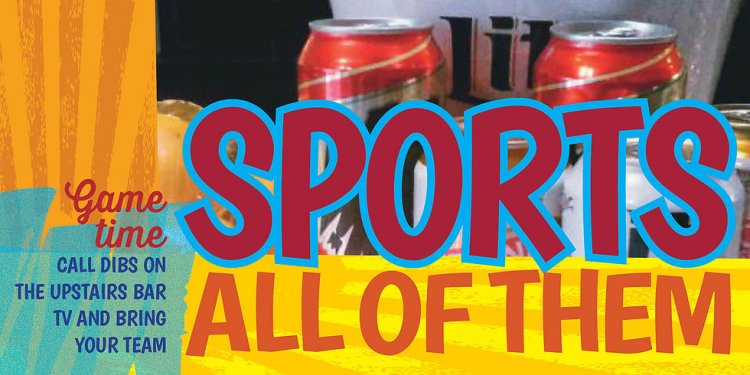 I've been here several times and was never impressed with the service or food. However, decided to give these guys another shot.. Pleasantly, surprised with the diverse crowd and service. Jaime was wonderful, basically monitored and maintained the entire bar - always checked on us. She was the main reason Mom and I decided to stay for the late game. Food: Mom ordered the wings which were delicious. Nicely fried, sauce was tasty yet didn't make the wings soggy. You also will get a nice side of carrots and celery. You know how some restaurants only give you "a" piece of celery and "one" carrot. It's the small things. I would definitely come back, however they are on the pricier side with no game specials. At any rate, food, service = excellent!

My boyfriend did not lie when he promised the nachos would be some of the best I have ever had! They were delicious!!! Loaded with chunks of chicken, jalapeno slices, guacamole, delicious salsa and gooey cheddar cheese. It was a huge serving. The cheese was a sauce, similar to queso. We also ordered the chicken wings, the homemade sauce was quite good. Not too spicy. It was complemented with celery, carrot sticks and chunky blue cheese dressing. Drinks were well made and everything was reasonably priced, esp considering the size. Also a perk... they were playing the RED SOX game!! Will definitely be back when I make my DC return!

If you wanna watch the football games this is the place to go. Nice rooftop bar but if you sit in the back by the flowers beware of bees. Also the buffalo wings please make sure they are cooked all the way. The waitress was very nice and made sure we were able to watch the game we want. Great place for brunch and drinks.

I have to comment on the lack of professionalism that I saw tonight after the Chicago Cubs game. One of the bartenders refused to keep the sound on afterwards when a group of Cubs fans asked them to. His response was, "Look, there are a lot of Ohio State fans here and I have to put the sound on for their game." I understand that it is at the discretion of the establishment to judge what goes on the screens and through their speakers, but the Cubs just qualified for the World Series. Not only that, but right when the Cubs won, the bartender that refused the patrons' request asked a Ohio fan sitting next to me, "Cubs or Indians?" Or something like that, and then said he lost a shot after the dude said he guessed he was rooting for Chicago. After the guys that requested the game commentary kept on left, the same bartender, some patrons, and other workers kept on talking about the matter. As a former waitress, it was quite honestly one of the least professional conversations I've ever heard. They were loudly making fun of the Cubs fans' request and making sooo many biased remarks against the team itself. It's just sports, but come on, why try so hard to kill the vibe with your bitterness and clever little insults? The bartender said "I should have lifted up my shirt and showed them my Cleveland tee when they asked." And went on about what he SHOULD have done, pandering to the anti-Cubs remarks from another guy. I love the Chicago Cubs and walked to this bar for the second half of the game. At first, it was honestly a really good night, but my buzz was killed by the time I left Cleveland Park Bar and Grill. I am really shy and actually felt badly because I wanted the game commentary left on and the people were talking about how stupid the other Cubs fans were for even asking for such a thing. I honestly regret going and wish I'd chosen another place, but oh well, there's always next weekend. I guess my 1 star review might be an Ohio fan's reason to give it a 5 star one.

The CP B&G is consistently sub-par. There are a few good items that you can read about in other reviews, but everything else is bad to gross. The beers are served in small, plastic cups, but you're charged at pint-prices. The service matches the food: occasionally good but generally slow, often rude, and littered with mixed up orders. Any high ratings this place has received come from over-enthusiastic reviewers who seem to have had one good experience or one good food item. Those are exceptions, my friends. Come to this place if you want to sit outside or watch a football game. They have a ton of TVs, tend to show a lot of different games on game days (it is a sports bar after all), and they have a decent variety of bar food. These reasons give it its second star.