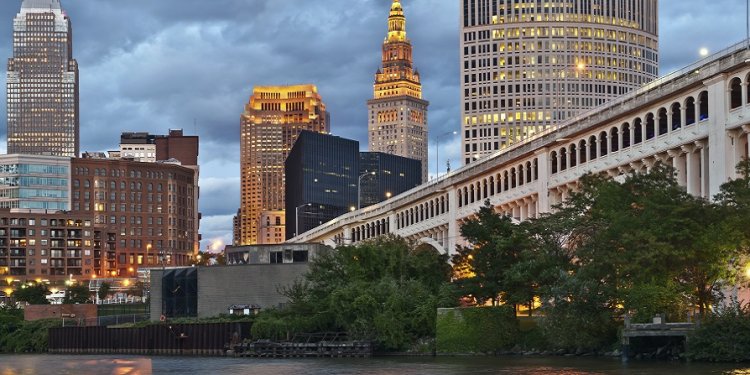 We’re getting ready to spend $16 million on a giant chandelier in Cleveland.

One of my friends cited this as her breaking point, the reason she is moving out of Cleveland. She and her husband are planning to move to Minneapolis. At least they’re trying to do things with transit there and improve quality of life, she said.

This giant chandelier, planned to hang in the Playhouse Square area, she said, is like our personal version of the “world’s biggest eggroll.” It will make us look like rubes, she said.

Cleveland has an infant mortality rate in certain neighborhoods higher than Rwanda. We’re getting ready to close our East 79th Street rapid station due to lack of about $15 million to make it ADA accessible. At the same time, we’re spending $16 million in casino payments on a giant outdoor chandelier. No wonder my friend is so disgusted.

This comes on the back of a discussion I have having with some people online this week about the “Cleveland Skylift.” Some young men who work in IT have proposed building a system of “skylifts” throughout downtown. The idea is to attract tourists. Look at this rendering they have of how this would look downtown.

It’s like science fiction. It’s absurd! This is not an efficient way to move people, but moving people isn’t really the point. It is simply another gimmick, another increasingly desperate ploy to make our city attractive to tourists, even though on many levels it’s failing residents.

If this project is built it will be Cleveland’s extra-desperate People Mover. It serves no practical purpose. It is not grounded in any community need. It has no business being seriously discussed as a public project, whether it is paid for with private money or not.

Other peer cities are building streetcars that are pumping new development into downtown. And here in Cleveland, we have this fantastical plan to build skyways across the city. The really bad part is folks like the Plain Dealer and the Greater Cleveland Partnership are actually taking this proposal seriously. That is how lost we are as a community right now.

It’s one gimmicky thing after another to “attract tourists” to our downtown. We just finished a $500 million convention center. To top it off, we are publicly financing a Hilton Hotel.