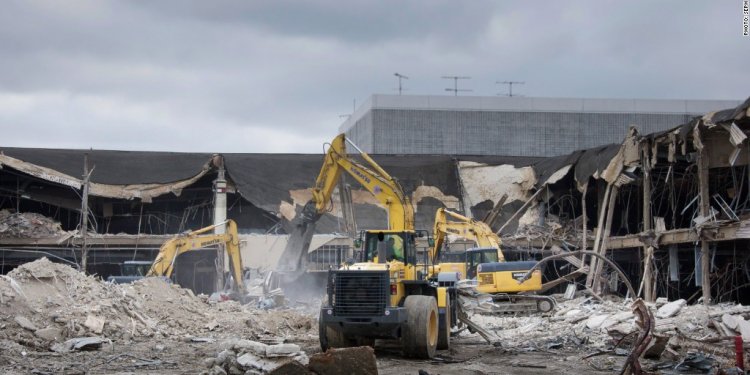 CLEVELAND, Ohio - Millions have passed through the Galleria at Erieview, sun glinting on its barrel-shaped glass roof. But it took a nurseryman's granddaughter to look up and think:

Now Vicky Poole, the Galleria's marketing and events director, who worked on her grandpa's farm as a child, expects that by late spring or early summer, there will be fresh tomatoes for sale among the shops and galleries at the downtown Cleveland mall.

Very fresh - as in vine-grown in bags and troughs hanging from steel stair banisters and ceiling beams in the shopping center that stretches between East Ninth and East 12th streets.

Poole got the idea last year when she spotted a photo of dozens of plants growing on a two-story window grid in a New York cafe.

She was reminded of the picturesque glass rotunda in the Galleria's food court that she often curtains off for wedding receptions. Renting out party space is one of the ways Poole has found to make up for the Galleria's losing many of its retail businesses.

"It's not really a shopping mall anymore, " she said about the complex that opened in 1987.

It wasn't long until Poole and Jack Hamilton, whose Artist Review Today magazine office and gallery are in the Galleria, teamed up to form Gardens Under Glass, their name for a project they call an "urban eco village." This month, they were awarded a $30, 000 start-up grant from Civic Innovation Lab.

Poole and Hamilton said the project is meant to be a bold statement about sustainability as well as a novel way to attract more people - and their money - to the mall.

"I know of no other urban garden in the country like this, " said Hamilton about Gardens Under Glass. He hopes the project will grow every day.

Poole and Hamilton put in the first green stuff this week - a 12-foot cart of lettuce and other greens near the Galleria's first-floor escalators. Their aim is to start an education center and store in a former candy shop, invite sustainable-product makers to display and sell their items, and sell produce to restaurants and individuals.

They dream of hosting school groups and teams of volunteer urban gardeners eager to work beds of herbs and greens and vine systems raised hydroponically, aquaponically and in organic soils.