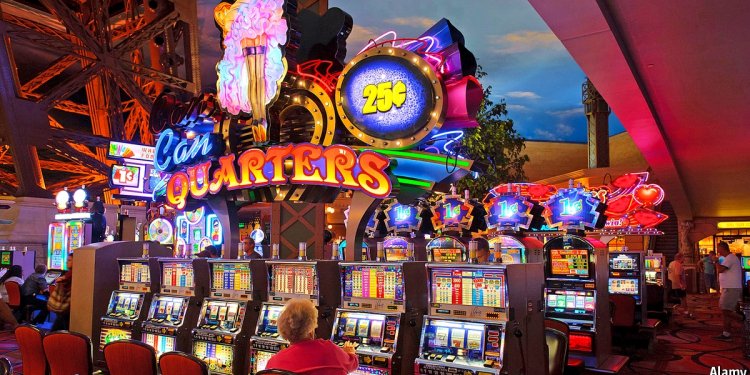 Where do I start with this place I am handicapped and we pulled up to have the car parked and was charged $30 I guess is the first issue when we asked where we could park ourselves in handicap spot we are told that they are on the third and four level and that is it. We were told that $10 would be taken off if we became member card holders and stayed 30 mins. We went ahead and payed the money and go to find the casino and after wandering around for a while and asking was told it was across the street.

Well you have to cross twice in the first place and walking is something I can not do well. We got a wheelchair for free about the only thing free in this place and went for it. Cleveland city have done nothing about the cross walks which have holes like you would not believe at the ramps. Finally at the door and you open it and you have t least 5 steps up. You have to get on the thing they call elevator in order to get to the floor which was ver small to get into.

Oh i forgot about the FREE wheelchair it went to the right all the time and so pushing it was hard as ****. Well we went to look for the cardholder place and the line was so long. I am diabetic and we had not eaten so we decided to do that first. $13.99 for lunch, Only one elevator in the whole place so I left my chair upstairs so much hassle and no help from employees.

The meal was so spread out I found it very hard to go from one side to the other to see what they had. This should be moved to a few lines to make it easier for those who can not walk well. the food was crap. Not hot like it should of been and i found myself eating bread in order to get full. We asked for a seat where it would be easier and they sat us in the Asian food and the American food was way at the other end and salad.. I asked for a table down more and was told it was all full. When my roommate went that was she said there are many tables not taken.

After lunch we went upstairs to get the wheelchair and to get in line for the card well the line was longer then when we first looked at it. We decided that since we have already spent $60 and have not played yet and was having a crap time to just go for it. My roommate could only find $10 tables any where she looked and there was not room for 2 of us on any table so i went to the slots. Spent $100 and got nothing back nothing!

I was told that they had slots upstairs but who cares and they could not tell me if it was better up there or not like lower tables and better slots then the penny ones. I found my roommate and she was down $100 as well and I was so unhappy with this place we left so the day ended spending $300 for nothing . When we returned the wheelchair we told them that it was going off to the right and she just put it back with the others.

I will never go to this casino again if it becomes the last place on earth. I have been to many and was just in vegas a few months ago. I would rather go to earie penn then to go to this place of all the open land we have up here they pick downtown what the homeless can play the penny slots was a joke it sucks so if you have not been do not go if you have game and had a good time i do not know what to think just that you have not been to many places in order to compare i guess.