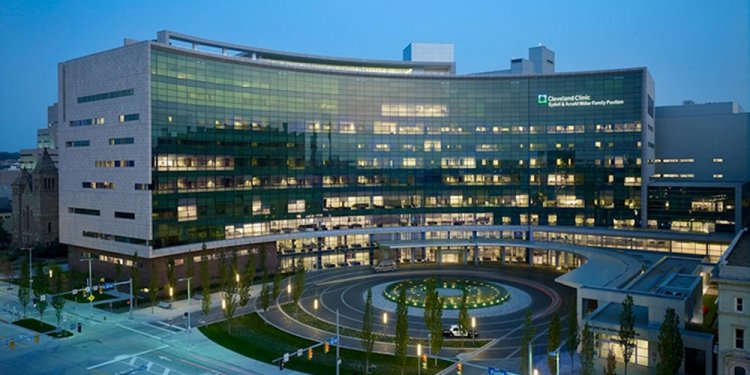 CLEVELAND, Ohio - The Cleveland Clinic hopes to build a hotel - possibly a Holiday Inn - at Euclid Avenue and East 86th Street, if the city approves a demolition request for the historic church that now stands on the site.

Brian Smith, the Clinic's director of strategic project development, described the hospital system's plans for the Church of the Transfiguration property during a Thursday presentation to the Cleveland Landmarks Commission. The Episcopal Diocese of Ohio, which owns the church and has asked permission to raze it, recently entered a purchase agreement with the Clinic for the land beneath the building.

Landmarks Commission members, who have some control over historic buildings in the city, tabled the demolition discussion after more than an hour. They asked the diocese and the Clinic to make a follow-up presentation Sept. 26, with details including a site plan for the hotel.

Thursday's discussion once again showcased the challenge of historic buildings that sit, and deteriorate, for decades, with little investment from private owners and few apparent consequences. Sometimes, the neglect is willful. But in the case of Transfiguration, the Episcopal Diocese didn't have access to the building from 2006 to 2011, after the congregation split from the church.

When Bishop Mark Hollingsworth, who leads the diocese, arrived in Northeast Ohio in 2004, he found a few dozen church-goers and a crumbling Gothic Revival building at 8614 Euclid Ave. Citing safety concerns, the diocese eventually decided to close the church. That's when the congregation left, spurring a five-year legal fight over the building.

The parishioners didn't have any money to make basic repairs, let alone structural fixes that would have cost several million dollars. Since reclaiming the property, the diocese has received two estimates, from $6 million to $8 million, for making the building stable. Real estate brokers advertised the building as a historic-rehabilitation opportunity for nearly two years, with little response.

"It has become very clear to us because the building is unsalable, because it has no functional use, " Hollingsworth said during a brief presentation before the Landmarks Commission. "It is beyond anybody's ability to stabilize it and make it into any functional use."

If the diocese clears the site, the Clinic will combine the 0.83-acre property with land on either side to create a development pad for a hotel. The Clinic, which controlled roughly 700 hotels rooms on its main campus until August, recently closed the 231-room Cleveland Clinic Guesthouse to make way for a new Case Western Reserve University medical education building.

"Every day that we don't have the hotel opened, with the closure of the Guesthouse, it's an ongoing challenge, " Smith said during an interview.

To replace the Guesthouse, the Clinic and InterContinental Hotels Group are considering a 270- to 275-room Holiday Inn, Smith said. Without a site plan, it's unclear how the hotel would fit with the nearby InterContinental Suites, on Euclid; a Clinic parking garage just south of the church site; or the former Cleveland Play House complex, which the Clinic plans to re-use.

Smith would not comment on the potential purchase price for the church land.

A few audience members at Thursday's meeting asked the Clinic to consider incorporating the church building into the hotel - a suggestion that Smith, in a subsequent interview, described as impractical.

The diocese and its consultant, developer Rick Foran, are cataloging items in the church and working with a historical archaeologist to ensure that anything that can be salvaged will be. Those items include a single stained-glass window, a baptismal font and a carved wooden pulpit.

Michael Fleenor of the Cleveland Restoration Society said he appreciates those efforts, which lessen the blow of losing a significant building. But he expressed concern about the dwindling of historic buildings along Euclid, a street once known as Millionaire's Row.

"We really just hate to see another building in this neighborhood come down, another historic church, " Fleenor told the commission. "What does the public gain from these losses?"

Built in stages, starting in the early 1900s, the church was never finished to include a tower envisioned by architects Cram, Goodhue & Ferguson, who designed famous cathedrals and school buildings. Known for years as Emmanuel Episcopal or Emmanuel Church, the church was rechristened as Transfiguration in the 1990s.

During a tour this week, the air inside the building was still and stale.

The church's floor is uneven. Cracks climb up the walls from some of the arches. In the hallways, paint is peeling in sheets. Offices and meeting rooms tucked behind the nave are strewn with cast-off papers and books, including a 1930s ledger.

A huge chest of drawers in the dressing room is filled with robes and other vestments, neatly folded as though waiting for a Sunday service. The basement floor is an obstacle course, littered with wooden organ pipes, furniture and boxes of buttons.

Cleveland City Councilwoman Mamie Mitchell, whose ward includes the church, told Landmarks members that she supports the hotel project. She worries that the church, which is fenced off, is unsafe.

"I don't have a problem with this, " she said of the demolition request, "because I have to be responsible for 25, 000 people or so in ward six. I would hate for someone to get crumbled by falling debris."