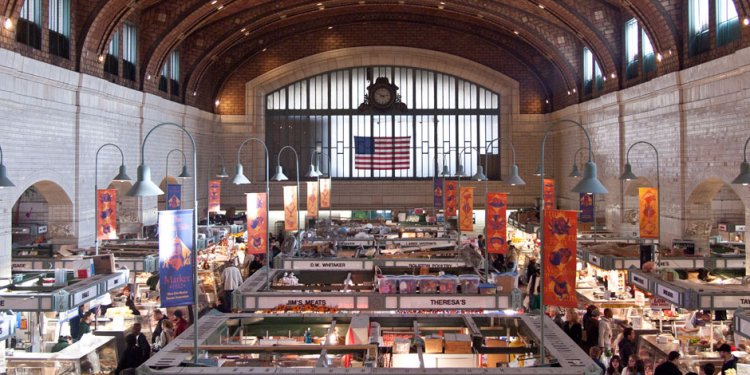 CLEVELAND (AP) — Growing up in the 1980s, Sam McNulty often visited the food vendors at the West Side Market, located in Cleveland's Ohio City neighborhood.

"I kind of fell in love with the neighborhood back then, even though it was considered sketchy, " said McNulty. By the 1990s, when McNulty interned with a community development organization, "the neighborhood was still largely boarded up — not a place you wanted to be after dark, " he recalled. "But you were starting to see little glimmers of hope."

Today Ohio City offers visitors a very different impression. There's a booming craft beer and dining scene with some 40 eateries, many concentrated around West 25th Street. McNulty opened his first restaurant, Bier Markt, at 1948 W. 25th St., over 10 years ago; today he co-owns five restaurants in the area, including two of the brewpubs Ohio City is now known for.

Meanwhile, the West Side Market, more than a century old, isn't just some vestige of a bygone era. It's a vibrant, bustling retail food center with more than 100 vendors and a million annual visitors.

The neighborhood expects to be busier than usual with Cleveland hosting the Republican National Convention July 18-21. McNulty says he fielded requests to book his restaurants solid with GOP events, but decided to book up just one venue each night so the other four would be open to the public.

"We're excited to show off all the good things happening here, " he said. "It's going to be a good time."

Here are some details on visiting Ohio City.

Nothing celebrates Cleveland's ethnic heritage like the food at the West Side Market: pierogis, Hungarian-style sausage, strudel and more. Locals can shop for groceries, hungry visitors can get ready-to-eat food ranging from tamales to cupcakes, and out-of-towners can pick up gifts like honey, spices, gourmet popcorn and jams. Don't miss the clock tower, 137 feet tall; the 44-foot-high tiled, vaulted Guastavino ceiling, and the head of a longhorn steer overlooking Foster's Meats.

Dozens of charming Victorian homes — from simple cottages to Italianate mansions — can be found along quiet residential streets in the heart of Ohio City's historic district, which stretches to West 44th Street. Look for quirky turrets, windows in many geometric shapes, lacy wooden spindlework and broad, columned porches. Some homes are adorned with flags and flowers, some are painted in whimsical colors.

Brothers Patrick and Daniel Conway helped pioneer Ohio City's resurgence and its craft beer industry when they opened the Great Lakes Brewing Co. in 1988 at 2516 Market Ave. Today Great Lakes is one of a half-dozen breweries in the neighborhood, and one of several offering a tour. McNulty's Market Garden Brewery, 1947 W. 25th St., also just started hosting tours.