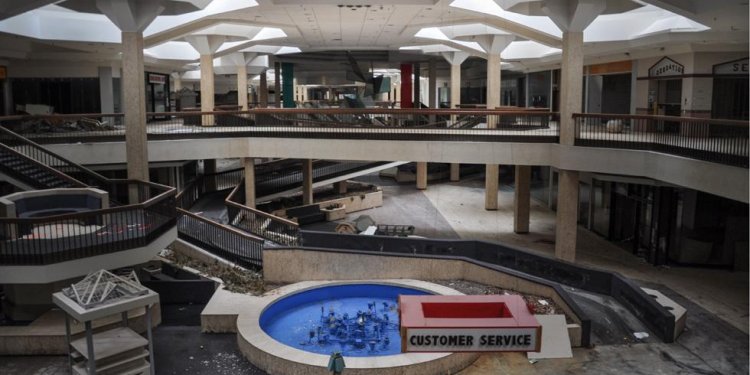 Hosted by skateboarder Rick McCrank, the show explores abandoned places across the country "with the people who love them long after the lights have gone out. 'Abandoned' pays tribute to these modern day ruins, seemingly lost and forgotten, but not by everyone, " the network says.

The premiere episode, entitled "Ghost Mall" and airing next Friday, focuses on Cleveland and Northeast Ohio.

"This area has had a lot of hard times, " McCrank explains in the opening scene, filmed in the fall of 2015. "It went from a boom town to a bust town and it seems to be still recovering from that. I've seen a lot of dead malls. To me, this is really extraordinary. We really wanted to explore them and figure out why this phenomena is happening here.

"There's a trail of abandoned malls across America and Northeast Ohio is the mecca, " he says.

Lawless gets a bit emotional while looking up at the shattered mall sign, almost tripping over a piece of one of the letter fragments on the ground.

"This should be a sobering wake-up call for most Americans to see, " Lawless says as the camera pans to the former Magic Johnson Theater, an empty Days Inn and a boarded up Toys 'R Us.

McCrank then visits Rolling Acres Mall in Akron, where he meets up with two Rolling Acres "enthusiasts" who now make zombie movies and record paranormal activity inside the mall.

"I do miss this place a lot, it's unreal, " Damon Moore says, looking down upon the vandalized ruins of the mall. "I do really would wish people get a little more control of themselves."

At Euclid Square Mall, McCrank finds some hope in the state of abandoned malls. The stores have been replaced with churches like the Faith Baptist Church, where the skateboarder was moved by a rousing Sunday service.

"People used to get their haircut here, now they're playing some funky bass, " McCrank says. "It felt normal. It felt like that should've been there. This is better than going to buy a new phone or going to get shoes in the mall."

The episode doesn't just focus on malls. McCrank drives through Cleveland as the camera shows the desolate streets around him.

"You can find all kinds of abandoned places here, " he says to the camera. "It's hard to believe that this was once such a thriving populace. This place was like the Silicon Valley of yesteryear."

McCrank comes across a former diaper factory on the West Side that has been turned into a makeshift skatepark. Naturally, there is skateboarding in this and future episodes.

Sure, the show ignores the progress and revitalization of Cleveland, but that's not really part of its focus. If you're looking for a think piece on the causes and solutions for urban decay, you've tuned into the wrong show.

The series, however, does deliver on its promise of stunning, often eerie visuals of once grand structures that have fallen, sometimes tragically, into disrepair as well as perspective that is more nostalgic than historic. In future installments, "Abandoned" takes viewers to emptied towns, a former amusement park, abandoned places along Route 66 and the modern day ruins of Detroit.