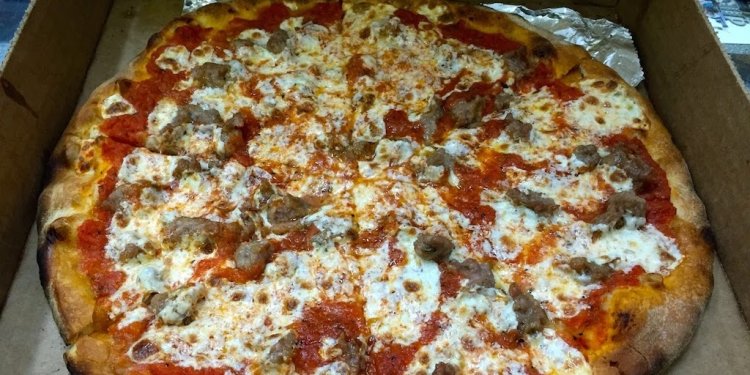 
Every neighborhood needs a friendly place to hang out and watch sports; although I never cared for the term "sports bar." Cleveland Park Bar & Grill seems to rise above the moniker, providing plenty of good food, atmosphere (and a cool rooftop bar area) in eatery-heavy Cleveland Park.
This mini-review will focus on the aforementioned good food, specifically pizza, which we ordered for take-away in the middle of a rare snow storm yesterday. Pies are generously-sized for one; but we were splitting two pies amongst three people, and there was more than enough to go around. At $12.50 a pop (create your own pizzas are $9.50 + $3 for each premium topping) they're more expensive than nearby Vace, but a few bucks less than even closer Coppi's (hmm, sounds familiar.)


One caveat - We asked for both pies to be cooked well-done (thus crispy) but the Sausage pie was downright flimsy: The Pepperoni however, was perfect. Aside from that, it's hard to find fault with what could be Cleveland Park's best pizza. The crust is to die for, and the toppings (cheese, sauce, meats) almost Heavenly. My brother from another mother wasn't as impressed; but truth be told, he hates any pizza that isn't really, really crispy. Also, he had to foot the bill, so...

Turnover is fast (promised in 15 minutes, no additional wait time) and the person on the phone was friendly and efficient. Tuesdays are even better, when a second pizza (dine-in only) sets you back a paltry $2. Considering how good they are, I can't think of a better place to watch the Caps or Wizards kick butt on a day normally reserved for leftover meatloaf or an episode of 19 Kids and Counting (ugh.)

Can't say enough about the crust... even the flimsier version, topped with sausage. A simple NYC fold solved any handling issues; and left one's attention to the taste, which was excellent. Tuesday can't come fast enough.

Atmosphere: B (Love the rooftop area.)
Service: B (Always energetic and friendly.)
Crust: B (Great taste; but the sausage pie was extra flimsy.)
Toppings: B+ (Gooey cheese, terrific sauce. Nice pepperoni, but more/bigger sausage would be greatly appreciated.)
Value: B- (Wish they offered a large pie for groups.)