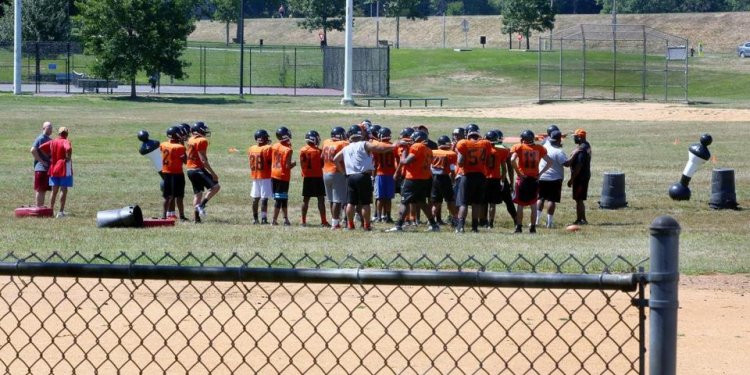 The man on the east side Cleveland football practice field doesn’t look like anyone who might be aligned with the high school football players running their 40-yard practice dashes as the sun starts to dip in the west. He’s dressed in a dark suit, with a bright linen dress shirt and a small dark tie, with dress shoes brightly shining on the recently installed synthetic field.

As he watches the 60 or so players as they finish their 40-yard sprints, Glenville High School football coach Ted Ginn Sr. is not yelling with inspiration or scowling at these young men closing up their Monday workout. He is talking on his cellphone, keeping up with the 400-plus students attending the Cleveland public school he runs, Ginn Academy, and making sure the kids not playing football for him are on the right course toward decent grades and scholarships to colleges by next spring.

And it is that part of the legendary Cleveland football coach that often gets ignored when discussing Ginn’s accomplishments, his leadership academy for young men in Cleveland’s east side African-American community that has not seen the improvement the city’s leadership likes to brag about to national media covering the Republican National Convention and the Cleveland Cavaliers NBA championship this past summer. For Ginn, it is much more practical: get his good football players on scholarship to schools such as Ohio State University, his little players to Division II or III colleges, and the young men at Ginn Academy to accept a scholarship at private colleges that want the students’ ability to get good grades.

What Ginn has been working to do for the past 20 years or so as a head football coach – with the last 10 or so running a separate school concentrating on getting 80 percent of the students college scholarships – has not changed his views, but has better concentrated what he emphasizes. Meaning, what one learned as a 17-year-old either on the football field or within the special school, is essential “to teach them we don’t have time for foolishness, and our goal is to break through from much of the foolishness that society has built into many of their heads, ” Ginn said.

After practice this week, senior running back Demerius Goodwin, 17, echoed Ginn’s view that emphasizes hard work and how that translates into improvements after high school football.

“Most of the stuff we learn in playing football for Coach Ginn at Glenville High School is how to be a leader on our time, ” Goodwin said after preparing for the state playoffs this week. “We understand more and more that we are responsible for figuring out leadership roles and inspiration for doing those. We realize what we learn in football practice and in school inspired us to improve ourselves and our community.”

The approach to teaching young men is a key to what Ginn does as both a football coach and as a director of Ginn Academy. “Everything I’ve talked about in the past is now in real time and something we have to adjust to, ” Ginn said. “Our young people are being taught that everything is in an uproar and is crazy for them. But we have concentrated on dealing with young people from our heart and to help them with their attitude on what comes out of their mouth.

A steady stream of players to Ohio State

What Ginn has done in Cleveland is important in many respects. He was born in Louisiana, moved to Cleveland with his mother when he was 11 and later attended Glenville High School. He worked as a security guard after graduating in 1974, and later volunteered as a football coach at his alma mater starting in 1976. He was appointed head coach in 1997, and his players became known as good scholarship players for the Big Ten. During Ginn’s nearly 20 years as head coach, about 100 players have gone on to play football at Ohio State University.

With nine players currently in the NFL – including his son Ted Ginn Jr. with the Carolina Panthers, Cardale Jones with the Buffalo Bills and Donte Whitner with the Washington Redskins – the Glenville Tarblooders are one of the most successful programs at producing professional football talent. In 2006, Ginn was offered jobs outside of Ohio, including as a football coach in high schools in the Dallas area in Texas.