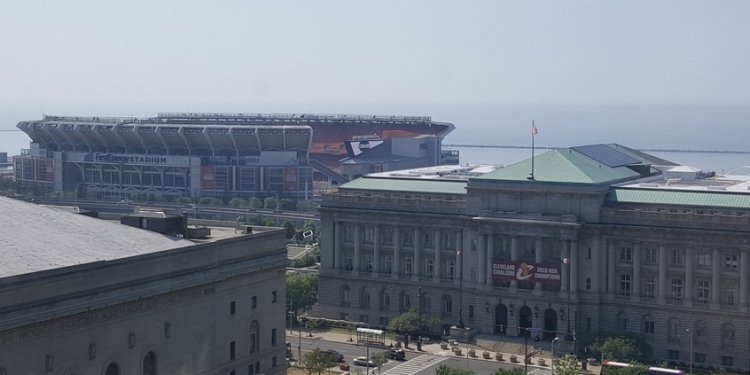 And a chestnut vine, several yards long, wraps its runners across the glass house's horizontal girders.

"It's appropriated most of the RainForest, " RainForest horticulturalist Tim Peters said of the vine. "It trained itself."

This lush garden is the polar opposite of a garden where every plant politely stays in its designated space. Except for cutting back too-tall palms and keeping the vines from completely covering the glass walls, RainForest horticulturalists let the plants do what comes naturally.

It's wild, by design.

"We want the immersion feeling, " Peters said. "We want that wild look, like in the jungle."

The roar of a 35-foot waterfall, the enveloping heat and humidity, piped-in jungle noises and exuberant foliage make it easy to imagine that you've walked into a miniature jungle in the middle of a Cleveland winter.

The RainForest showcases more than 10, 000 plants and 600 animals from each of the world's tropical rainforest environments - those of South America, Africa and Asia. This naturalistic two-acre, two-level exhibit is one of the largest of its kind in the country. It was built for $30 million and opened in 1992.

Cycad, bamboo, croton, palms, ficus, ferns, climbing schefflera and Chinese evergreens are among the plants growing in the exhibit, where jungle-like temperatures and humidity cause plants to grow larger than normal. In homes and offices, a potted pothos vine might reach halfway around a window. Here, pothos leaves are the size of a serving tray, and the vines wrap around palm trees from bottom to top.

Peters has overheard RainForest visitors complain that the botanical display is just a lot of houseplants. "Where do they think houseplants come from? The plant in your living room comes from somewhere in the world, " said Peters, who tends the exhibit with horticulturalist Pebbles Bush.

Since part of the RainForest is a glasshouse, you wouldn't expect lack of light to be a problem. But the tinted glass installed to prevent the structure from overheating also cuts down on the amount of light reaching the plants. RainForest horticulturalists compensate with plants that tolerate low light. Grow lights have been installed in some gloomy corners.

Peters and Bush revealed how the living wall of plants is achieved. Small potted plants, such as maidenhair fern and spider plants, are inserted into brick-like blocks, which are inserted into a metal grid running over the wall. As the plants grow, their leaves obscure the metal grid. Irrigation pipes at the top of the wall deliver water and fertilizer.

The horticulturalists' jobs include feeding plant trimmings to zoo animals, under the veterinary staff's supervision. Primates like palm fronds, and leaf cutter ants munch on pothos, croton and orchids. Otters housed in the RainForest sit up and beg, asking for a treat in the cutest way, when the horticulturalists approach the ottters' watery enclosure.

Peters and Bush relish their unusual horticultural assignment. "I come to Florida every day when I come to work, " Peters quipped.

They hope the RainForest teaches visitors about the importance of beneficial plants and how much is lost when rain forest habitat is destroyed.

"It's not just plants and animals. The whole system is important, " Bush said.